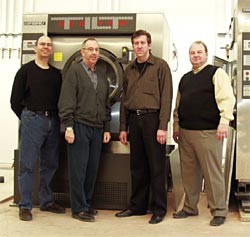 "When Bobby Brown of Bell Boy Cleaners was told he had to remove perc from downtown Fredericton, NB, he had a choice: He could retire and close up shop, or he could lay the foundation for a whole new generation of growth for Bell Boy. He chose the latter, and in the process he set an example of how to turn a potential business disaster into a stepping-stone to further success.

A CITY IN MOTION
Five years ago, the city of Fredericton publicized its plans to move certain types of businesses out of the downtown area. The city is built directly over the most sensitive part of its aquifer. This is where the city receives the majority of its drinking water. Maps of the underground water supply showed there were zones farther out of the city where an accidental spill of various chemicals would not be disastrous to the aquifer, allowing more time to effect emergency cleanup. In addition to dry cleaners, the city also plans to have gas stations and other businesses that use chemicals considered hazardous to the aquifer move to less sensitive areas. It will also require the removal of all heating oil tanks from hundreds of downtown homes..."